As growth in the Miami Valley in the 1950s began to expand south of Dayton, it was decided that starting a new Episcopal parish in the Kettering and Centerville area was needed. To this end, St. George's was founded in 1954 and first started meeting in the basement of a bank at Town & Country on Route 48. The nascent congregation moved to its current location in 1955 and began construction on a new church building, completed the following year. St. George's became a self-sufficient parish with a year, and to accommodate rapid growth, the church expanded and built a new worship space (the current one) in 1962. The original worship space was converted to a parish hall.

Many people ask, "What is the Episcopal Church?" Its roots are in the Protestant Reformation of the 1500s, but what makes the Anglican (and Episcopal) Church unique is that it is both Catholic and Protestant. It is Protestant in content (theology, doctrine, etc) and yet Catholic in form (liturgy, ordained ministers, vestments, etc.). Our faith is shaped by the ideas of justification by faith alone and the authority of Scripture, and yet we retain the historic offices of bishop, presbyters (priests), and deacons. We worship in a liturgical style drawn deeply from the ancient Western Christian tradition and celebrate Holy Communion every Sunday.

The Episcopal Church is divided into geographic regions, each region is called a diocese. Every diocese has a bishop who is the head of that diocese, and usually has a Cathedral where the bishop resides when not visiting parishes in their diocese. St. George's is part of the Diocese of Southern Ohio, which includes Cincinnati, Columbus, Dayton, and extends east all the way to West Virginia. Our Bishop and Cathedral are located in Cincinnati.

The Episcopal Church observes the traditional Christian Calendar of the Western Church. The Church year begins with the season of Advent during which we prepare for Christmas. Advent begins on the Sunday closest to November 30. Christmas itself lasts twelve days, after which is the Feast of the Epiphany (January 6).

Lent is the forty days of preparation before Easter and begins on Ash Wednesday in February. Easter, the celebration of Jesus' resurrection from the dead, is followed by a season which lasts fifty days, concluding on Pentecost. The rest of the church year is considered the Season of Pentecost and goes until the start of the next Advent.

To add to the beauty and festivity of the services, and to signify their special ministries, the clergy and other worship leaders wear vestments. Lay Readers and Choir vestments usually consist of an ankle-length robe called a cassock (usually black) and a white, gathered over-gown called a cotta. Vergers, who are lay ministers who act as 'masters of ceremony' wear gray vestments, often trimmed with red, and carry a staff called a verge. The clergy wear a black cassock and a longer white over-gown called a surplice. Over the surplice ordained ministers wear either a stole, a narrow band of colored fabric, or a tippet, which is a long, thick black band of fabric. Clergy will also have  two white "tabs" or bands which hang down from their collar. These preaching bands represent the Old and New Testaments of the Bible, and that the preacher is charged with proclaiming the full Word of God. At the 10:30am service the minister who is preaching that day will wear a tippet and may also be wearing an academic hood to signify their theological training to be a preacher. The minister who is leading the service, called the Celebrant, along with any other clergy assisting with Holy Communion will wear a stole to match the church season color. Deacons wear the stole over one shoulder, priests and bishops over both shoulders.

Vestments and altar coverings are usually made of fabrics whose colors are changed with the seasons and holy days of the Church Year. The most frequently used colors are white, red, purple, green, and blue.

St. George's has 48 stained glass windows in the chancel, narthex and nave of the church. There's even a book about them! If you'd like to purchase a copy of Anne Roweland's Like Stars Appearing for $10, please email to request a copy, or pick one up at our Welcome Center after a worship service. Make use of our Virtual Tour above to get a better look at these windows before you visit! 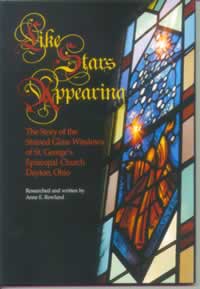 Completed in 2002, Saint George's stained glass windows are inspired by the hymn I Sing a Song of the Saints of God and reflect almost four years of planning, research and fabrication. They replace the crumbling and leaking original windows from 1962 which had more than lived out their expected 30-year life span. The window of Saint George himself in the narthex contains pieces of these original windows in the red cross of George's banner. Red is the most precious color of glass as its hue is achieved by the incorporation of gold dust within the melted glass.

St. George's windows are called "antique" glass (meaning new glass but hand blown by the traditional method) held in place by lead framing, protected by double panes of thermal glass on the exterior of the building. In years to come, the leading can be repaired and replaced making the life expectancy of these windows to be quite long. 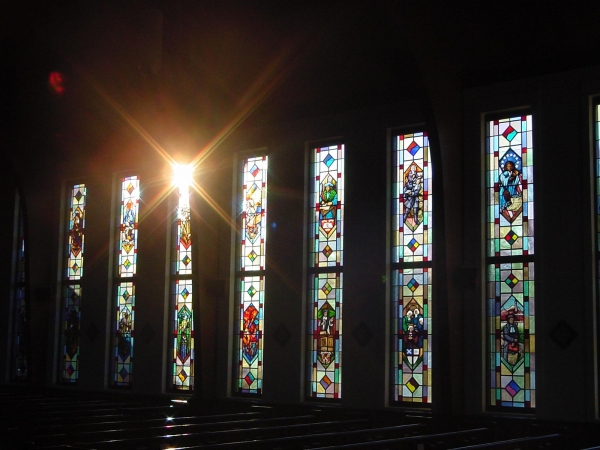 The windows were designed by artist Joan Collins of Willet Studios of Philadelphia (now Willet Houser Architectural Glass, Inc.), one of the oldest glass studios in America. St. George's windows depict saints and historical figures which tell the story of God's call to people throughout history. Two points of interest are worth noting.

First, that the saints depicted cover a wide range of church history, with some being well known and often depicted (like Augustine, Francis, Margaret of Scotland, and Patrick), and others being either lesser know or not as frequently found in stained glass windows (like Hilda of Whitby, Joan of Arc, and Ignatius of Antioch). Numerous windows are figures unique to the Anglican Church and the Episcopal Church, such as Thomas Cranmer, Richard Hooker, Absolom Jones, and Florence Tim Oi Li. St. George's windows have been featured in publications around the world, including the Macau Times and a doctoral dissertation in Romania. There is even a window of beloved author and Christian apologist C.S. Lewis!

Second, as much as possible and within reason the figures are depicted as historically in context, rather than conformed to an idealistic standard. For example, Augustine, who is well known to history as being of North African Berber origins, is depicted as an African writing in the city of Hippo, quite different from the typical medieval versions of an European in cope and miter.

Continuing in the ancient tradition of communicating through glass work beauty, history, theology, and God's sovereign guidance over human lives, St. George's windows are not only objects of art but of inspiration—truly a gift of beauty and faith to the greater Dayton community.