Adult Choir: We rehearse Wednesdays from 7:00 to 8:45 pm, and Sundays at 9:45 am. The Adult Choir sings every Sunday at the 10:30 service from September to June. Please come and sing with us! Contact Dr. David Crean if you have questions. We welcome new members at any time of the year.

We gather the Festival Choir for special services, including Christmas Eve, Easter, and Choir Sunday. This choir is comprised of the Adult Choir and those who would like to sing but whose schedules prohibit them from singing regularly. If you like to sing and cannot sing every Sunday, consider augmenting our choir for these special feast days by joining the Festival Choir. 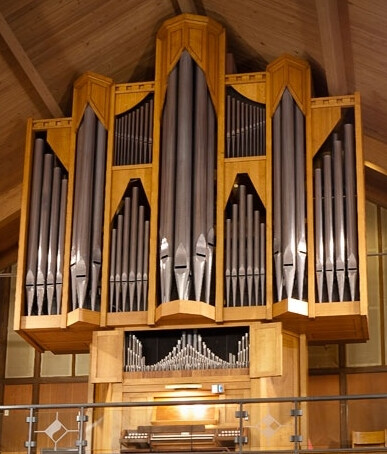 The organ at St. George's Church in Dayton, Ohio, was designed and built by C.B. Fisk, Inc., of Gloucester, Massachusetts, in 1988 and completed in May of 1989. The two-manual instrument, Opus 94 of the Fisk firm, has 23 stops totaling 1,702 pipes. Visit our page on the C.B. Fisk website for more information on the organ

from the Dedication Organ Recital, May 14, 1989, Marilyn Mason, Organist:

The organ at St. George’s Episcopal Church, Dayton, Ohio, was designed and built by C.B. Fisk, Inc., of Gloucester, Massachusetts, in 1988 and completed in May of 1989. The two-manual instrument, Opus 94 of the Fisk firm, has 23 stops totaling 1,702 pipes in a case of quarter –sawn white oak. In 1981 the late Charles Fisk designed the specification for what he called “a three-manual organ appearing on two manuals.” He combined French and German elements to create an American eclectic organ capable of leading congregational singing, accompanying choral music, and playing 400 years of organ repertoire with authority.

Charles Fisk’s innovative idea was to play both the Brustpositiv and the Swell divisions from the upper manual. Reversible pedals control the wind to both of these divisions, making it possible to select either the Brustpositiv or the Swell, or to play both simultaneously. Since the Great, played from the lower manual, is essentially a constant through all periods of organ building, the ability of the second manual to take on the character of a 17th century Brustpositiv or a 19th century Swell gives the organ a versatility not hitherto possible on a two-manual organ.

The Great is the largest division. The 16’ Prestant of hammered lead strands in the façade. This stop is the basis of the principal chorus (16,8,4,2, mixture) which is the backbone of the instrument. This plenum, standing on windchests at impost level behind the façade, is used for performing major organ works, such as the preludes and fugues of Bach, and for leading hymn singing. The flutes, Spillpfeife 8’ and Rohrflote 4’, are patterned after 17th century German stops. The Spillpfeife is a full length, tapered stop with a soft tone reminiscent of a consort of viols; the Rohrflote, wide-scaled, peppier and more flute-like in tone, can be used alone or in combination with the Sesquialtera III to brighten the principal chorus. The Trommenten 8’ is a reed based on a similar stop dating from 1642 in Tellingstedt, Germany. This trumpet enhances the 8’ foundation when added to the plenum.

The Swell, French in character, is housed in a large, heavily built box above and between the two sections of the Great. A Balanced pedal, mechanically connected to louvers on the front and sides of the enclosure, opens and closes the louvers, or shades, allowing wide variations in volume. The design of the box and the stops within it are based on the work of the 19th century maser builder Aristide Cavaille-Coll. The pipe-work in this division is intended to play the great French literature such as Franck and Widor. The reeds, Hautbois and Trompette, are solo stops, as are the Flute harmonique and the Cornet IV. The wider scaled, softer Chimney Flute 8’ and Spitzflute 4’ may be used to accompany the choir or with solo stops on the Great.

The Brustpositiv is patterned after the Brustwerk of the Fisk organ at Wellesley College, which is in turn an historic recreation inspired by the small 17th century organ at the Jacobi Kirche in Lubeck, Germany. This division sits just above the console behind a pair of doors which may be opened or closed to adjust volume and timbre. In the front is a colorful reed stop, the pungent Regal 8’, with all resonators four inches in length. The flute stops (8,4,2) are very delicate and transparent. The sparkling Zimbel III adds a fiery special effect. Individually these sounds are useful as continuo for ensemble music of the Baroque period. In combination they are effective for the dances and variations of the Renaissance. Though German in inspiration, the sound of the Brustpositiv is not unlike that of many small English organs of the 17th and 18th centuries which inspired generations of composers, including Handel.

The Pedal division shares the Prestant 16’, Octava 8’, Spillpfeife, and Trommenten with the Great. Independent of the Great, the bass of the 16’ Posaune speaks from behind the screen. This large German trombone proves 16’ foundation to balance the support the Great plenum. The Superoctave 4’ can be used as part of the pedal chorus or alone for a cannis firmus. The Mixture IV completes the pedal chorus.

Both the key and stop actions are completely mechanical except for the lowest notes of the Prestant and Psaune which are controlled pneumatically. The wind system is patterned after those built by Gottfried Silbermann, with the addition of a large winker which can be engaged for music needing a steadier wind supply.

The organ is tuned in a slightly unequal temperament first developed by Charles Fisk for his largest instrument, opus 78, at House of Hope Presbyterian Church, St. Paul, Minnesota. This temperament gives flavor to the common keys for earlier music but still allows music in all keys to be played. The tonal quality of Opus 94 was determined by the meticulous voicing of each pipe. The principals have generous toeholes, healthy windways with light nicking, and moderate to high cup-ups resulting in a warm, singing fundamental tone. The flutes are voiced more delicately with narrower windways and smaller toeholes for a softer, more elegant sound. The reeds were carefully voiced by curving their brass tongues until maximum tone was produced but speech is still prompt.

Just as the specification and pipe scaling of the organ at St. George’s were designed to complement the church acoustically, the organ case was specifically designed to harmonize visually with its setting. An exactly scaled model of the church was used to allow the designers to work with the clean modern lines of the sanctuary to create an organ that would appear to have always been there. Opus 94 combines a contemporary style with a traditional arrangement of towers and flats to produce a modern case with historical allusions.